Purchased for Nook Tablet from Barnes and Noble.

Three out of five stars. 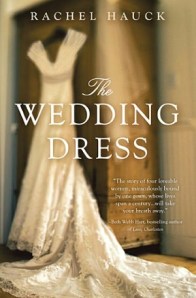 It’s what every little girl dreams of: Finding her perfect wedding dress.  For Charlotte Malone, it should be a piece of (wedding) cake.  She does, after all, own a contemporary bridal boutique in Birmingham, Alabama that she runs with her best friend Dixie…
Finding the perfect gown should also be “To-Do List Task Number One”, being that her wedding to Tim Rose is just two short months away.  So why then, does Charlotte find herself heading up to Red Mountain seeking God’s wisdom and guidance, praying for answers to her questions and doubts?  Perhaps it was fate that brought her there on the exact day of the famous Ludlow Family Estate auction.  Maybe it was destiny that drove her to bid on and win a rickety old trunk.  Inside the trunk, to Charlotte’s surprise, is a pristine wedding dress.  One that has quite the story to tell…

What follows is Rachel Hauck’s heartfelt, homespun novel The Wedding Dress, tracing the interwoven tales of four women: Charlotte, Emily, Hillary and Mary Grace; and the bridal gown that is the common thread tying their lives together.  It makes a valiant attempt at being a whimsical blend of romance, historical fiction, and chick-lit, but in the end falls short of this lofty goal.  The book focuses heavily on only two of the women, Charlotte and Emily, almost ignoring the other two, and bites off more than it can chew.  I felt that it should have picked one or the other, romance or historical fiction, instead of trying to be both plus Christian  and/or Inspirational fiction.  I include Inspirational fiction because it’s not overly religious, rather it mentions God sporadically or a character prays in passing.  The Wedding Dress will appeal to brides-to-be, newly-weds, women celebrating their umpteenth anniversary, and anyone in between who appreciates a sincere and spiritual light-hearted book about love between friends, strangers, partners, families, and yes, occasionally God.