Borrowed from the Waterloo Public Library.

Three out of five stars. 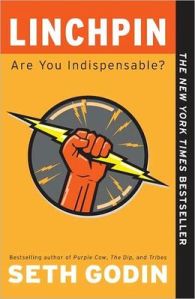 In his book Linchpin: Are You Indispensable?, Seth Godin seeks to identify a new team in the organizational landscape, one that is neither labor nor management, but rather a new type of workers which Godin refers to as “linchpins”.  This type of person is one who sees things differently than others; they have exceptional insight, are able to view the world through an unbiased lens (known as pranja), are productive, generous, creative, good at making connections with others, and are selfless.

In the first third of the book, Godin replays the evolution of work from humans’ origins as hunters to farmers and eventually factory workers.  Organizations, in an attempt to lower monetary, time, and effort costs created a system where workers would perform the same duties day in and day out in order to efficiently create the final end product, whether it is a car, a hamburger, a website, and etcetera. People working in this type of environment developed a “produce, conform, consume” mentality, which in turn fed the factory-model of organizations and furthered the demand for more cogs to spin the wheels.  Enter the linchpins who, unlike the passive, obedient, replaceable “cog” laborers of the factory-mentality economy, are indispensable artists, entrepreneurs, inventors and leaders.

The author’s analysis of the shift from the factory-era worker to this new linchpin mindset was fairly straightforward.  He explained how people (through the factory-model) are taught to be replaceable, to consume heavily, and to fit in.  Repeated attempts at keeping up with the Joneses created a network effect of consumerism: people wanted things immediately, cheaply, and easily.  However, as economic shifts occur it has become easier to outsource work overseas, create machines that can perform work tasks, or consolidate several positions into one or two.  The author argues that organizations are now left with an abundance of cogs: replaceable workers who are easily outsourced, consolidated, or eliminated.  Godin’s answer is to transform into linchpins by continually seeking out new problems to solve, developing a good sense of judgment and depth of knowledge, treating each interaction with customers, clients, coworkers and supervisors as a learning experience and by exerting emotional labor.

On page 101, Godin begins his chapter called “The Resistance”, where he outlines reasons why people are hesitant to transform from cogs to linchpins.  To me, this is where I began to lose interest.  Godin starts off strong with a quote from Steve Jobs, “Real artists ship”, and explains the factors that inhibit shipping, (which refers to publishing, selling, presenting, sending, etc.).  One of these forces Godin calls “thrashing”, which refers to the editing, tweaking, changing, and deleting that occurs before, and often delays, shipping. The next is coordination, which can postpone shipment when there are too many people involved. Following this initial forthright segment, the next 50 pages read as a disjointed, schizophrenic rambling about “lizard brains” (a person’s fight-or-flight response), fear, procrastination, hesitation, second-guessing and rationalization that all hinder a person’s conversion from cog to linchpin.  Godin could have easily edited this section down to far fewer pages and made the same point: in order to ship you have to stop thrashing and start doing.  He eventually offers some concrete advice on how to do this, (1. Write down the due date, 2. Keep track of each idea, notion, thought, plan, sketch, etc. on paper, 3. Collect the cards of ideas and put them in a database, 4. Create a description for the project/website/presentation/ paper etc., 5. Take the blueprint to your supervisor or boss), but the steps almost get lost in the mix of everything else.

Following “The Resistance” are chapters on gifting (a process necessary of linchpins), creating your own maps, choosing to become a linchpin, and what to do when being a linchpin isn’t working.  Only one chapter, “The Seven Abilities of the Linchpin” provides readers with any sort of concrete, how-to advice.  While other readers might want clearer guidelines and straightforward instructions, I don’t think it was the author’s intent to provide them.  Rather, in linchpin-esque fashion, I think Godin wants readers to create their own map and come to their own conclusions on how to stop being a cog and start being a linchpin.

I chose to read and review this book after coming across it on GoodReads.com’s “Best Career Books for Young Professionals” list (and had to read and review a business book for my Organizational Management class).  Linchpin had overall good ratings on GoodReads (3.96 average out of 5) and was ranked number four on the list, and after skimming the reviews I thought it would be an interesting read (other readers called it “riveting”, “provocative”, “thought-provoking”, “stimulating”, etc.).  While there were certainly portions of this book I would describe using those adjectives, overall I think the book suffered from being too long, too fragmented, and too repetitive.  I think it would have made a wonderful chapter in another book, an essay, or a series of blog posts, but I often felt as though I was rereading segments, or the author was rehashing (and more than once contradicting) past portions.  Overall, I felt that the content was innovative, intriguing, and interesting, but the delivery was lacking.

Despite some of the issues I had with this book, I would still be interested in reading a few of Seth Godin’s other titles, notably The Dip, Tribes, and Purple Cow, all of which are mentioned briefly in Linchpin.  Although I am not certain, I felt that there were ideas in Linchpin that were not fully explained because they had been touched on in Godin’s previous books.  I would recommend this book to someone who is either familiar with Godin’s other works, or who is looking for something they will be able to put it down and come back to over a long period of time, rather than read straight through in a few sittings.  I felt that this book contained some great ideas, but that they just weren’t cohesive enough.